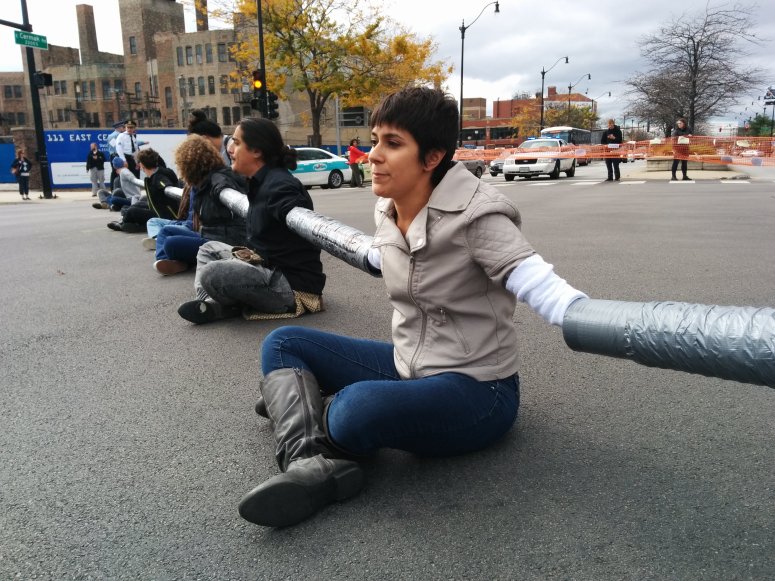 Today, community members from around Chicago, and organizers from around the country are standing with Black Youth Project 100 as they protest the International Association of Chiefs of Police Conference in Chicago. The excessive brutality and overall ineffectiveness of the Chicago police has been widely reported upon throughout the country. During the last year, the city bowed to the pressure of direct action, and agreed to pay reparations to a number of survivors of police torture, but the Chicago Police Department continues many of its violent practices in Black and Brown communities, and police impunity remains a cultural norm. Given this city’s well organized, strongly abolitionist resistance to oppressive police practices, local activists are especially insulted by the presence of the International Chief of Police Conference in our city. We already live in a state of violent occupation. Now, those conditions are being compounded as thousands of police from around the world gather to talk shop about the tactics and tools they will use to harm people in their communities in the coming year.

In response to this, and in solidarity with the young leaders of BYP 100, Lifted Voices has collaborated with grade school students to generate artwork for our blockades that will amplify their feelings and concerns about this conference. They believe that safety comes from within communities, rather than from police, and we agree. One of the ways we build safety is by organizing together against the forces that threaten us. The police are definitely one of those forces, and their violence must be challenged.

So today, we lift up the artwork of Chicago’s children, and will be sharing the words of two young organizers from the Village Leadership Academy with the police who have come to arrest us. Kaleb and A’mani, who are 13 and 15-years-old, respectively, are powerful young Black activists who hope the police will hear these words today:

To Whom This May Concern,

Our names are Kaleb and A’mani. We are young black organizers from the city you are in right now. We have been fighting to stop you all from killing and abusing us.

Y’all have blood on your hands.

That’s why we demand that you hold your officers accountable. We will shut down every city across the country if you all do not stop the anti-blackness, racism, and all systems of oppression that you play a role in now.

We also demand that the Chicago Police fire Dante Servin without a pension.

We are tired of this institutionalized racism. We are tired of meetings and conferences where you talk about different ways to kill us. We will shut everything down. A revolution is here. It is at your door. You can open the door or we can break it. But change will and has to come.

You are not welcome here or anywhere in the presence of us. We will kick you out of power and destroy every system that keeps us oppressed.

What side are you on?

Make your decisions because we won’t stop.

Organizers for the Revolution

The members of Lifted Voices are grateful to BYP 100 for organizing this event, and we are proud to stand with them today. We have shutdown Cermak and Indiana with our friends and allies and at least four other blockades, led by BYP and others are disrupting the conference right now. Follow #StopTheCops on Twitter for updates.

One thought on “#StopTheCops: Blockading the International Chiefs of Police Conference”